If you are history buff like myself, you would be amazed by the teasers released on the local drama set to be released on Singapore’s independence day on MediaCorp Channel 5. The 15-part English drama series is produced and directed by Lee Thean-Jeen with a stellar cast, adapted by the novel – The Devil’s Circle by Walter Woon. The producer, author and the line of casts were present during a virtual press conference hosted on MediaCorp Channel 5’s Facebook and Instagram.

This Land Is Mine feature star studded casts such as Pierre Png, Rebecca Lim, Sugie Phua, Elly Gaskell, Jasmi Ahmad, Shabir, Sora Ma and Charlie Goh. Set in post-World War II Singapore in the 1940s, the drama is about a rising associate in d’Almeida & d’Almeida, Dennis Chiang (Pierre Png) who struggled to re-establish himself. He was unable to find his identity while he defended a Japanese war prisoner who was put on trial by the British for being a traitor.

It was truly a filmmaking production by Singaporeans for Singaporeans with the pandemic. Plans to film scenic and realistic sets across the causeway in Malaysia was not possible with travels restrictions in place. For instance, it took two months to beautifully produce the interior of house of the Chiang. To complement the sets, the team sourced for authentic props such as the red chairs found in courtrooms. 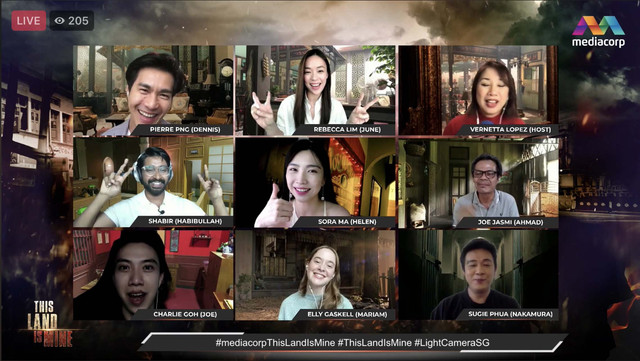 Behind-the-scenes scoops and whacky routines by casts were exposed. Elly had to study the Malay traditions for her character, with Joe Jasmi as her adopted parent in the Malay kampong setting. Shabir who plays Officer Habibullah from the Indian Army, had to do action scenes with just one arm as he play an officer with disability. It was a daunting task for everyone, especially for Pierre who had to project his anti-Japanese sentiments as he had to defend the nation’s biggest enemy in Singapore.

Inspired by real-life events such as the Maria Hertogh racial riots, Sook Ching Massacre and more, the drama highlights the struggles that Singapore faced as a nation in the aftermath of the war and the journey towards self-governance.

Don’t forget to catch This Land Is Mine tonight at 9.30pm on MediaCorp Channel 5!