Lewis Capaldi — The Quirky and Humble Underdog We All Love

It seems like Christopher cannot get enough of Singapore. Back in December, Christopher was in Singapore to film his upcoming single music video. Come March, he will be in Singapore for his debut concert! Having watching him perform live during … END_OF_DOCUMENT_TOKEN_TO_BE_REPLACED

A thrilling Korean blockbuster with the largest budget to date has garnered over 4 million admissions in Korea alone! Ashfall 백두산 portrays the effects of the devastation from the eruption of Baekdu Mountain within the Korean peninsula. Credits: CJ Entertainment … END_OF_DOCUMENT_TOKEN_TO_BE_REPLACED

Credits: Encore Films Facebook  Detention was originally a gruesome, spine-chilling game that was released in Taiwan, in which gained huge attention. With its popularity, the game was finally made into a live-action movie. Released on 20th September 2019, in just … END_OF_DOCUMENT_TOKEN_TO_BE_REPLACED

Since his last visit to Singapore 21 years ago, Hong Kong’s renowned 男神 (Mr Perfect), singer and actor, Ekin 郑伊健 has returned to our sunny island to hold a press conference for his upcoming concert Along With Ekin Live Concert … END_OF_DOCUMENT_TOKEN_TO_BE_REPLACED

The Gold Jacket Tour with Sam Tsui was an intimate yet cozy concert on a Sunday night. Sam took the effort to interact with every single fan who attended. He began the concert with his original track Impatience from his … END_OF_DOCUMENT_TOKEN_TO_BE_REPLACED

Credits: dimsum.asia It was an unforgettable weekend in Shah Alam as dimsum.asia celebrates its third year delivering quality streaming content to its viewers in Malaysia, Brunei and Singapore. dimsum is a Video-on-Demand (VOD) service that has been operating since … END_OF_DOCUMENT_TOKEN_TO_BE_REPLACED

Two legendary rock bands will be performing live this coming March 2020. LAMC Productions is the proud organiser of Rockfest II, a one-night only event, to entertain fans of rock music! The upcoming concert will feature world-renowned rock band, Scorpions … END_OF_DOCUMENT_TOKEN_TO_BE_REPLACED

Last month, Jesse Ruben was in Singapore as part of the annual Music Matters Live. This marked his second visit to Singapore. The Fifth Parlour managed to catch up with him after his set at Crazy Elephant. During our phone … END_OF_DOCUMENT_TOKEN_TO_BE_REPLACED

It is now time for everything Brown Sugar related to shine. Previously, it was the era of the salted egg. It is not a surprise that everyone is now jumping on the Brown Sugar bandwagon. Introducing KFC’s Brown Sugar Boba … END_OF_DOCUMENT_TOKEN_TO_BE_REPLACED

Singapore’s annual Music and Art Festival Neon Lights is coming back once again this year! With the reference of the previous editions, it is known that, Neon Lights festival is not all about music and arts but the whole experience. … END_OF_DOCUMENT_TOKEN_TO_BE_REPLACED

Three-time Grammy Award-winning and multi-platinum-selling vocal sensation Pentatonix will be returning to Singapore this coming February 2020!

Best known around the world for their refreshing take of today’s modern hits with their powerful harmonies, baselines, percussion and beatboxing, the quintet is back since the Singapore Grand Prix in 2016. Fresh off a 44-date North American tour, The World Tour will also hit up cities in the region such as Japan, Australia, New Zealand and the Philippines.

In addition to the Grammy Awards, the band has sold over 10 million albums globally! Pentatonix has recently released their fourth holiday album, CHRISTMAS IS HERE! 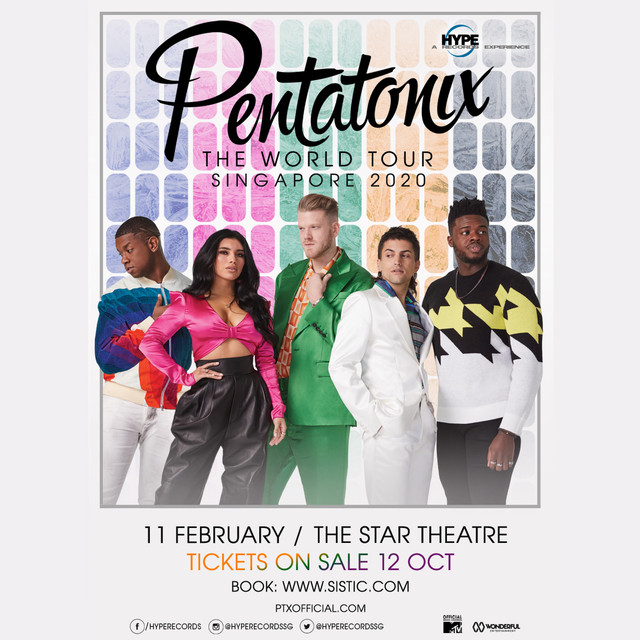 Shawn Mendes returned to Singapore after two years, as part of his ongoing self-titled world tour. This is currently the third world tour that the 21 year old Canadian heartthrob is embarking on. The sold-out concert took place at the … END_OF_DOCUMENT_TOKEN_TO_BE_REPLACED

Was the band formed during Mercury retrograde? Nathan & Mercury’s different theories and rumours finally hit our little red dot, Singapore, for Music Matters 2019! The four-piece band have been friends since meeting at a music production class in one … END_OF_DOCUMENT_TOKEN_TO_BE_REPLACED

Check out why we love @lewiscapaldi plus other fun-facts on the The Fifth Parlour now! (Link in Bio!) #lewiscapaldi #someoneyouloved
Is everyone ready for the legendary King of Chinese pop, Jay Chou? Today marks the 2nd and last day of his #Carnival concert in Singapore! #周杰倫 #嘉年华 #周杰伦2020新加坡站演唱会 #JayChou
Lewis Capaldi is in town! Catch him live tonight at the Capitol Theatre! #lewiscapaldi #universalmusicsg
Thank you for all your support in 2019. We hope that we will be able to bring you more content in 2020!Stay tuned! 🥳
#EricChou has wrapped up his concert day 1 in Singapore by singing many classics of his that he is known for, ending it with 「你好不好」 and looks forward to the last day tomorrow! #周興哲 #周興哲你好不好亞洲巡迴演唱會
#EricChou 周興哲 performing a special stage of the movie ‘A Star Is Born’ original soundtrack ‘Shallow’ with his junior 師妹 Kelly Cheng 鄭心慈 #周興哲 #周興哲你好不好亞洲巡迴演唱會
期待新歌 「小時候的我們」 ！！ #EricChou #周興哲你好不好亞洲巡迴演唱會 #周興哲
@ericchou0622 performing his upcoming new release song for the first time here in SG tonight!!! #EricChou #周興哲你好不好亞洲巡迴演唱會 #周興哲
We are here at @ericchou0622 concert live in Singapore!!! #EricChou
Ekin 郑伊健 was in Singapore to promote his upcoming #AlongwithEkin concert tour live in Singapore. Ekin who hasn’t been back in SG for 21 years was very excited to meet the fans from SG after so long! Be sure to check out our article on our website! #Ekin #郑伊健 #ekincheng #ekincheng鄭伊健
Relive your muscle memory on surprises that went down during @thesamtsui The Gold Jacket Tour on the The Fifth Parlour! #thegoldjackettour
@ekin_cheng_official will be performing live in Singapore on December 28. His last visit to Singapore was 21 years ago! Be sure to get your tickets!! #Ekin #AlongwithEkin #鄭伊健