Great news for movie-goers in Singapore since the reopening of the cinemas in July! Encore Films is back to deliver its diverse films from the region and beyond! With social distancing and safety measures in place, patrons felt comfortable with their loved ones as we adapt to the new normal. If you are fan of non-fiction or biographical films or just curious how it is linked to the Tokyo 2020 Olympics (now postponed to 2021), please read on! 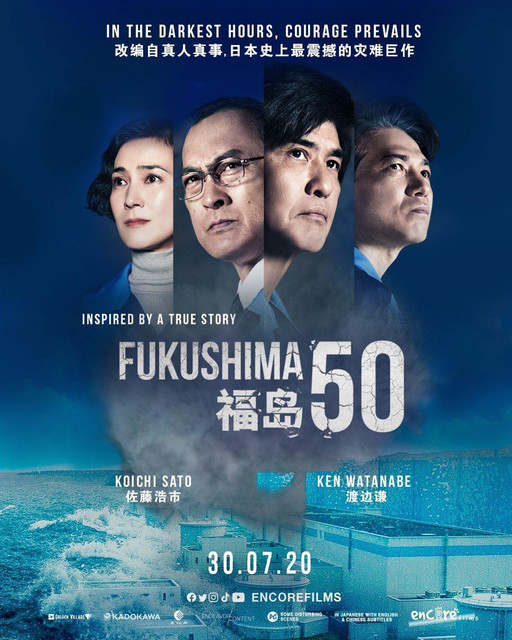 The brainchild of Fukushima 50 is based on the non-fiction book entitled On The Brink: The Inside Story of Fukushima Daiichi by Ryusho Kadota. The massive gathering of personal accounts was carried through the extensive research and interviews with over 90 people who were in close proximity to the scene of the nuclear power plant accident that caused a mounting damage.

The Japanese film directed by Setsuro Wakamatsu narrates the events which occurred at exactly 2:46 pm on 11 March 2011 at the Tohoku region. It was the strongest earthquake in Japan’s history at a magnitude of 9.0 which also triggered a massive tsunami and carnage to the effect of more than 19,000 deaths. It mercilessly swallowed the Fukushima Daiichi nuclear power plant in Fukushima prefecture. If the power plant was abandoned, Japan’s destruction was assured. Facing such a life or death situation, workers known as the Fukushima 50, including shift supervisor Izaki (Koichi Sato) and plant manager Yoshida (Ken Watanabe), remained on the site of the nuclear power plant on the brink of disaster. As the world held its breath and watched, they fought for their hometown and their families.

An American high commanding officer flips through a photo album and remembers fond memories of his childhood living in the prefecture across the Fukushima Daiichi nuclear plant. Instead of prioritising his fellow people living in Japan as advised by the diplomat from the embassy, he chooses to help out with the post evacuation mission of the local Japanese. He calls it Operation Tomodachi, which means friendship in English. This is truly a relatable example to the present times as the world currently faces a pandemic. Helping one another and finding the possible solutions to problems are skills which are highly valued in every community. It is definitely a remarkable film to watch with the whole family!

Fukushima 50 is an impressive film that encompasses various moral values and dilemmas which one has to overcome. The real test of courage is seen as time passes throughout the ordeal face by Japanese government as well as the decision makers from the nuclear power plant. The teamwork and effort to stay behind at the hazardous torn area has been mirrored and signified for the soon to come Olympics in 2021. As a landmark attempt, the lighted torch relay will begin for four months from J-Village, a sports training centre in Fukushima that was established as a frontline facility for the nuclear disaster, eventually reaching the stadium in Tokyo.

Catch Ken Watanabe’s constant rebellious and out of this world leadership qualities and more in Fukushima 50 as it releases at the cinema from 30 July 2020!

The Fifth Parlour would like to thank Encore Films for the invitation!