The two-time Grammy award-winning vocalist, Tori Kelly is set to perform her very first concert on 17th April with the Inspired By True Events World Tour on our sunny island! As a former contestant on American Idol Season 9, the R&B and Gospel-influenced singer-songwriter, producer and multi-instrumentalist, Kelly have lit up the entertainment scene. With her angelic vocals and emotive songwriting skills, She has captivated a strong legion of fans around the world. 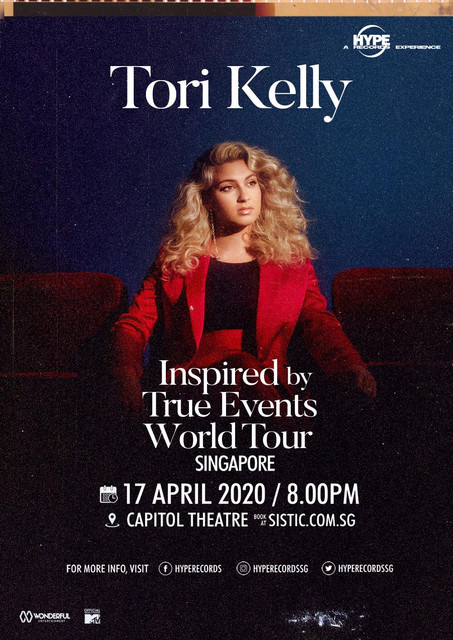 In 2015, Kelly released her debut full-length album, Unbreakable Smile, including singles such as Nobody Love and Should’ve Been Us. Unbreakable Smile became an overnight success, soaring at number two on Billboard’s Top 200, netting Kelly a Grammy nomination for Best New Artist. Following Hiding Place in 2018, it fared even better which earned her two Grammy wins for Best Gospel Album and Best Gospel Performance/Song.

Inspired By True Events Tour is in support of Kelly’s third studio album of the same title. She crafted the prefect album to get her back to the pop music vanguard. Produced by Jimmy Napes who had also worked with several well-known performers such as Sam Smith, Alicia Keys, Mary J. Blige. The new album is an insight of what to expect of the mentioned Tour which is a truly captivating journey combining bright coming of age revelations with melancholic sad bangers as Kelly pours her heart out and leaves nothing to the imagination.

An intimate night filled with splendid vocals, raw emotions, and amazing live-renditions with such amazing setlist, this is definitely THE show to be at!