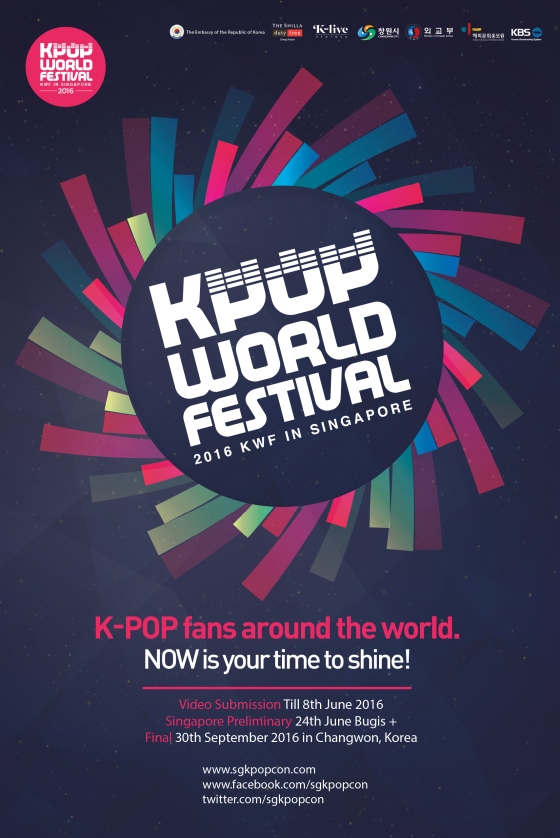 SGKpopcon is back on its search for representative local acts in the upcoming international selection of the 2016 K-Pop World Festival in Changwon – one of the biggest international competitions in Korea! Participants will get the chance to share the stage with some of the biggest names in Korean Pop Music, living the ultimate dream for enthusiastic Hallyu fans.

With over fifty audition submissions last year, SGKpopcon 2016 is thrilled to welcome even more talents to participate in this year’s competition. Online auditions are open to all Singapore citizens and permanent residents to compete in either the vocal or performance categories. Audition applications can be made via the official website from 16 May till 13 June 2016. (Extended deadline: Final Call – 13 June 2016, Monday!)

Shortlisted applicants will be invited to battle it out on stage at the Singapore Preliminary of K-Pop World Festival 2016, where the top two acts (from Vocals and Performance category combined) will move on to participate in the next round, representing Singapore in the competition against their international counterparts. More information on the audition requirements and process can be accessed on the official website at www.sgkpopcon.com

Aside from the power packed dance and vocal competitions, fans can expect a multitude of performances showcasing the cultural beauty of both Singapore and Korea.

Get ready for a unique experience – the SGKPopcon way in embracing the Hallyu wave! SGKPopcon 2016 is set to take place on 24 June 2016 at The Joyden Hall, Bugis+. Admission is free for all. However, due to limited venue capacity, attendees will be allowed entry on a first come, first service. So, be sure to come early!