This duo caught my attention with their dance moves. It gets even cuter when their little sister joined them in the dance videos. Their videos have been viral and even caught the attention of celebrities.

Hailing from the Philippines, Ranz Kyle and Niana Guerrero has amassed 15 million subscribers collectively from their respective YouTube channels and close to 50 thousand subscribers on their joint account. They have a few awards under their belts such as Entertainment Champion by CICP Spotlight Awards and German Moreno Youth Achievement Award by The 70th FAMAS Award. Recently, the duo was in Singapore for YouTube Fanfest 2022 and The Fifth Parlour was lucky to have a quick chat with them. 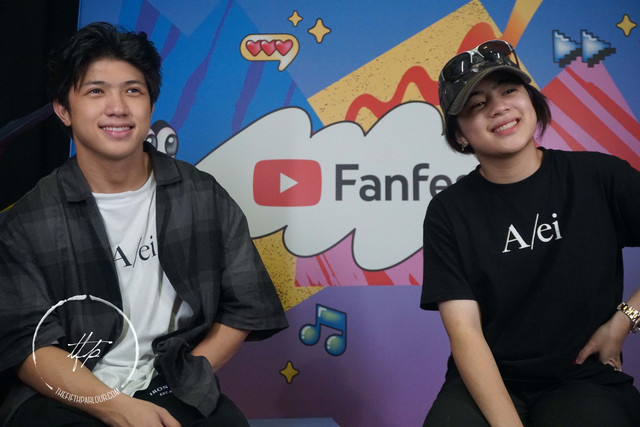 The duo was really excited to be part of the tenth edition of YouTube FanFest as they are able to connect with other content creators and meet their fans who have been supporting them. And of course, to be able to attend live events and meet everyone face to face instead of behind the screens.

Kyle started uploading videos on YouTube in 2011 as part of his hobby. He then invited Guerrero to join him on some of his videos just for fun. What turned out to be an impromptu idea to get Guerrero to join him on his covers turned out to be the best thing that comes out from the collaboration. Guerrero added that viewers wanted to see both of them doing more content hence, they are still here till today. To Kyle, it is important to love what you are doing to make it sustainable and be open to feedbacks was his advice to future content creators.

As someone who enjoys watching their videos, I was curious to know how long it took them to film a dance video. According to Guerrero, it took them only three days. On the first day, they conceptualize on the chosen song for the dance. They then practice the choreography on the second day and shoot on the third day. That is how fast they took just to film a dance video! However, it all depends on the type of dance as some might take a longer time.

Other than dance videos, Kyle and Guerrero also do other types of content for their videos. Currently, carpool videos are their favourite. Watching this carpool videos makes me singalong to the songs I grew up with! Their little sister, Natalia, never fails to make you go Awww with her cuteness.

With more contents coming from Kyle and Guerrero, they hope to inspire those who watched their videos and is exploring to create their own music. They hinted they are working on something, but their lips are sealed as of now. If you would like to know what is net for them, be sure to follow them on their social media channels, Instagram, Facebook and YouTube.

The Fifth Parlour would like to thank Ranz Kyle and Niana Guerrero for taking time for the interview and YouTube for coordinating the interview.