Fans of Korean drama and competitive sports will come together in celebration of Going to You at a Speed of 493km, the newest K-drama to land on Disney+. The series is written by Huh Seong-hye and directed by Joe Woong and Gu Seong-jun. 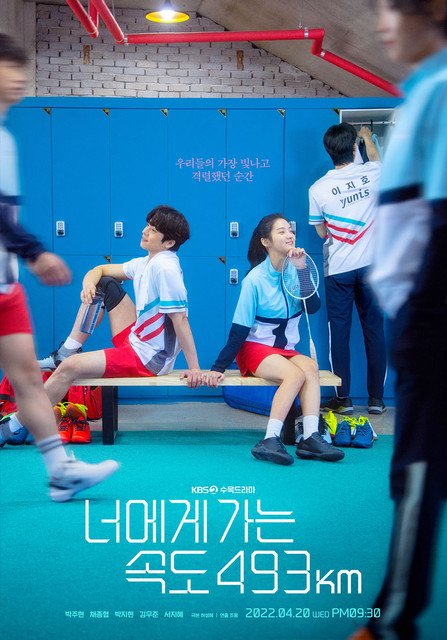 Starring Park Ju Hyun and Chae Jong Hyeop, this 16 episode series revolved around a story of love and redemption as a former badminton champion tries to reclaim her standing whilst dealing with her less than impressive mixed doubles partner. After being away from the world of high level competitive badminton for three years, Park TaeYang (Park Ju Hyun) suddenly made a comeback, stepping onto the court with her mixed doubles partner Park TaeJoon (Chae Jong Hyeop).

Being polar opposites in almost every aspect, TaeYang is driven to consistently go the extra mile with hopes of reclaiming her prestigious standing as a gold medal level competitor unlike TaeJoon. However despite their differences, the duo proved to be a formidable force on the court, and as they trained together, romantic feelings began to emerge between them.

Will they go to the next stage and be in a relationship?

If you curious, stream this sporty new series on Disney+ now!

Enjoy a Special Screening of DC League of Super-Pets at Funan!
🎙🎸
Catch the most anticipated South Korean film, Emergency Declaration starring Song Kang-ho, Lee Byung-hun, Kim Nam-Gil, Jeon Do-Yeon, Yim Si-Wan, Kim So-Jin and Park Hae-Joon.
The ASEAN Music Showcase Festival (AMS) is coming to Singapore! More than 30 regional and international artists will be showcased over the two days festival.
Lee Jong Suk and Lim Yoona star in brand new noir drama ‘Big Mouth’ which is now streaming on Disney+!
Join @amirkhanmma’s MMA Masterclass at the OCBC Square on National Day for 30 minutes of high-paced cardio-packed workshop.
ADAMAS is the latest Korean drama series to be available on Disney+. The star-studded casts include @justin_jisung , @jihye8024 , @xxiuzing , @heosungtae and @ohdaewhan .
Golden Village (GV) is celebrating its 30th anniversary and to commemorate this milestone, GV has amazing deals for everyone starting this month till August. The event is happening on Saturday on 6 August 2022 from 6.30 pm to 8.45 pm at GV Vivocity.
Head over to Somerset on two Saturdays (today & 6 Aug) and soak in the festivity!
Sports brand, PUMA has appointed boy band @nct127 as the ambassador for APAC.
Starring Park Seo-joon, Peakboy, Choi Woo-shik, Park Hyung-sik and V from BTS, the five celebrities embarked on a trip together as they showed another side of themselves in the four episodes travel reality show on Disney+. IN THE SOOP: Friendcation premieres tonight on Disney+.
Take a breather and listen to Scenery’s latest single ‘June’ … read more about their brand new release on The Fifth Parlour 😊