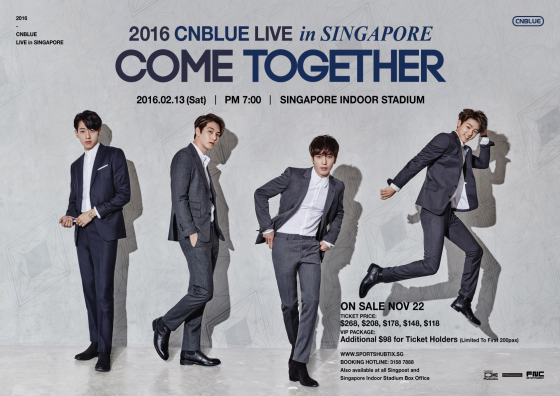 Mark your dates Boices! South Korean quartet rock band, CNBLUE will be back in Singapore on February 13 for 2016 CNBLUE LIVE in Singapore [COME TOGETHER]. The four-piece band last visited Singapore in 2013 when they rocked out with over 7000 fans for over two hours. Check out our review here! After a three year long wait, fans can now spend a pre-Valentine date with the band!

The quartet is no doubt one of the most prominent band in Korea’s music industry. CNBLUE recently held a series of successful concerts in Shanghai, China and Seoul, Korea, where they charmed audiences with a string of hits for over two hours. They performed a total of 21 songs — out of which 19 were members’ compositions — including those from their latest album 2gether and Japanese single album, White.

It will be a night of endless surprises, as the quartet is set to showcase their upgraded vocals and musical talents through live performances and new renditions of their songs. Domino and I’m a Loner will be given fresh leases of life on the synthesiser, and audiences can expect a wide array of musical styles ranging from the jazz pop intro in LOVE, to the reggae-influenced Rollercoaster, as well as ballads Hold My Hand and Irony.

Tickets are priced from $118 and will go on sale from November 22, 12 noon via Sports Hub Tix. 200 limited VIP packages (only available via online, hotline and Singapore Indoor Stadium Box Office) which will include entry to VIP soundcheck party and two official concert merchandise items, are also available for purchase at $98 for all ticket holders. Tickets are also available at all Singpost outlet (except VIP Package) and Singapore Indoor Stadium box office.

2016 CNBLUE LIVE [COME TOGETHER] in Singapore is promoted by One Production and organized by FNC Entertainment. For more information, follow One Production on their official Twitter and Facebook Page.

The Pancake Place: the Unexpexted Savoury Haven!
Check out You Should Have Said So by @rriley , her debut single under 465, a newly launched indie-pop label founded by Zendyll and The Kennel Asia.
Established in Hanover, Germany, Persona is an independent female-fronted metal band with three full albums including their latest - “Animal”. The band maintains its haunting sound while experiments to stay relevant to the metalcore/hardcore genre.
@thealexavilla shared with us the meaning behind her single, Call Me Crazy. Head over to The Fifth Parlour to read the full interview!
The Singapore International Film Festival (SGIFF) returns to the cinemas for its 32nd edition this November!
The iQiyi Original K-series showcases the Haidong Branch Rangers on Jirisan. Throughout the course of the four seasons, they brace through typhoons, fires, floods and untold dangers fearlessly in their search and rescue missions. The casts include Gianna Jun, Ju Ji-hoon, Oh Jung-se and Cho Han-Cheul.
Hip-Hop and R&B imprint label under @zendyllmusic , @hvt.ent presents local R&B artist, @itsfeez_ . The release of the single, “Under” is a collaboration between HVT Entertainment and Universal Music Singapore and features YHB Sleepsalot.
Local fashion label @akinndesign , led by creative director Wykidd Song teams up with recording artiste @thisisinch to launch a fashion capsule collection - AKINN 2.4: Kind Earth, anchored on the message of sustainability.
After a 7 year long hiatus … @thewantedmusic is back and ready to “Rule The World”! Check out our review of their newest single on The Fifth Parlour! #thefifthparlour #tfp #thewanted #twfanmily #nathansykes #tomparker #maxgeorge #jaymcguiness #sivakaneswaran
The Foundations of Love in a Bittersweet twist in 無源之爱 (No Room For Love) by Jason Yu and Soph T. 霏霏. as they collaborate on a mandarin song for the first time together!
“Here We Live, Here We Grow” is the theme for the Singapore Korean Film Festival 2021 (KFF)!
Stop Living in The Past and be in The Present! 🎤